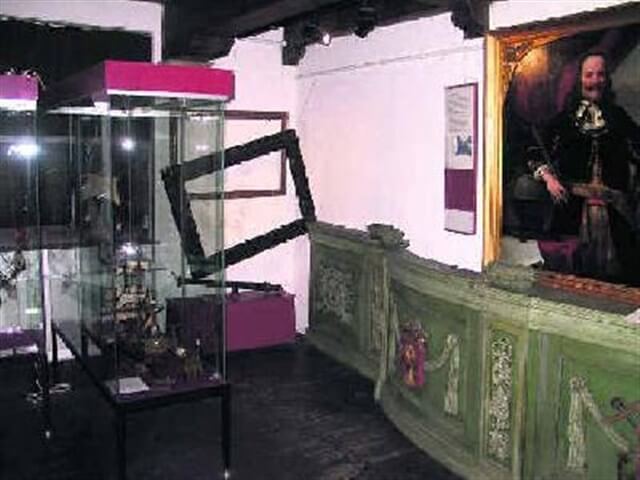 In the night of January 10, 2005 in the Dutch city of Hoorn 24 paintings and dozens of silver artifacts were stolen from the Westfries Museum. One or more thieves probably had let themselves be locked in while hiding in a coffin being on display.

Movement sensors had been sabotaged with tape. The total value of the stolen items is estimated to be circa 10 million Euros, the paintings having formed the heart of the museum’s collection.

Many of the stolen works of art have a direct link with Hoorn and its surroundings. The paintings in question mostly are by 17th century artists such as Jan van Goyen, Jacques Waben, Matthias Withoos, Hendrick Bogaert, Jan Claesz. Rietschoof and Jan Linsen.

Early 2014 a color picture of one of the paintings, Rebecca and Eliezer by Jan Linsen, suddenly appeared on a Russian website. Only black-and-white images of this painting existed so far, so the one on the website had to have been taken after the burglary. Information as to whom the picture had been uploaded by could not be found, though. 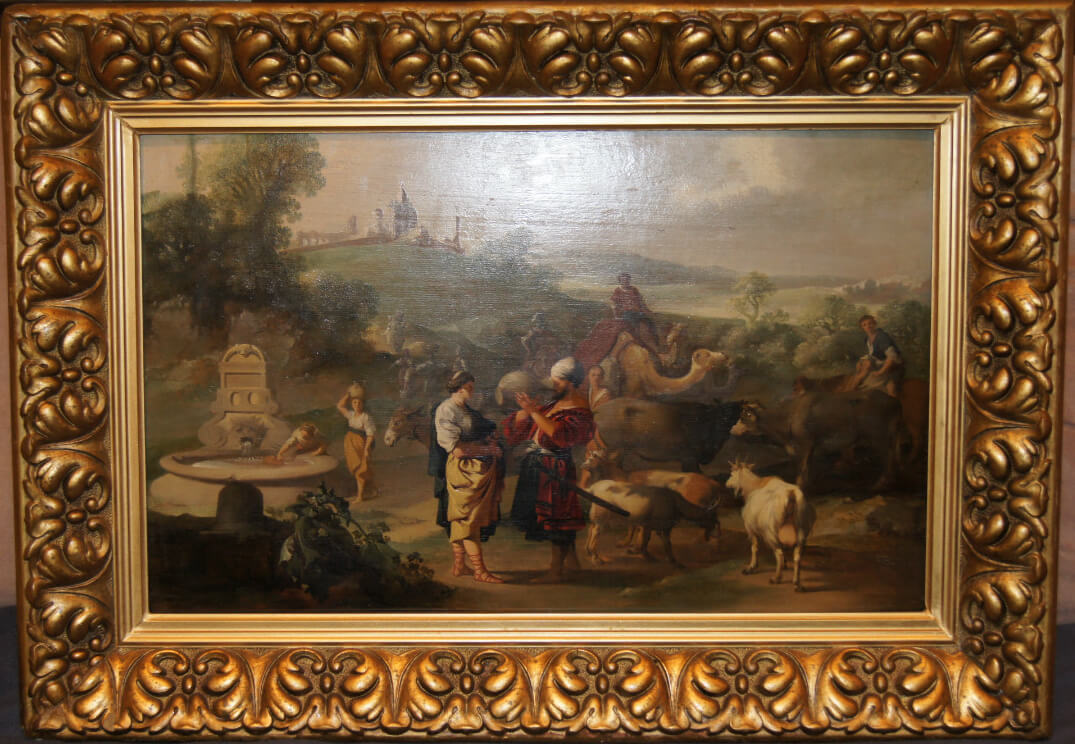 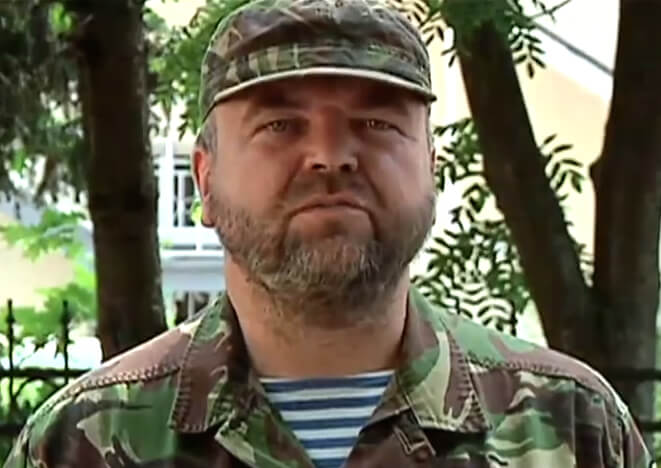 In the first week of July 2015 the Dutch Embassy in the Ukrainian capital of Kiev was contacted by Borys Humeniuk, the deputy commander of the OUN battalion, which consists of volunteers fighting pro-Russian separatists in the eastern part of Ukraine.

Apart from the OUN battalion there are more legions of Ukrainian nationalists, some of whom are under the suspicion of having committed war crimes, such as the execution of prisoners of war. Donations, smuggling and extortion is what they are financed by.

Humeniuk explained that in eastern Ukraine soldiers had raided a country house that had belonged to an individual close to the deposed president Viktor Yanukovych. There, he declared, a number of canvases had been found, which after investigation had turned out to be some of the ones that had been stolen in Hoorn in 2005.

In order to get the paintings back to their rightful owner, Humeniuk continued, he was willing to mediate. Since he estimated their value to be at least 50 million Euros and he had made a lot of expenses, he thought a reward would be appropriate, though.

The Westfries Museum contacted Arthur Brand of Amsterdam based research bureau Artiaz and asked him to meet Humeniuk, whose story Brand and his colleague Alex Omhoff immediately considered not to be very trustworthy.

Ukrainian nationalists thoroughly hate their former president Yanukovych for having been cooperating with Russian president Vladimir Putin and his involvement in an art heist would be all too convenient for Humeniuk and his fellow combatants.

Therefore, to Brand and Omhoff the whole story seemed fabricated and they were not convinced of Humeniuk’s good intentions. Moreover, the latter estimating the paintings to have a far too high value of at least 50 million Euros would complicate the talks.

If Humeniuk indeed had made expenses in the process of tracing the stolen paintings, he should be compensated. The amount available for this purpose was moderate, though, and so Brand and Omhoff had to convince him that his estimation was highly inaccurate. 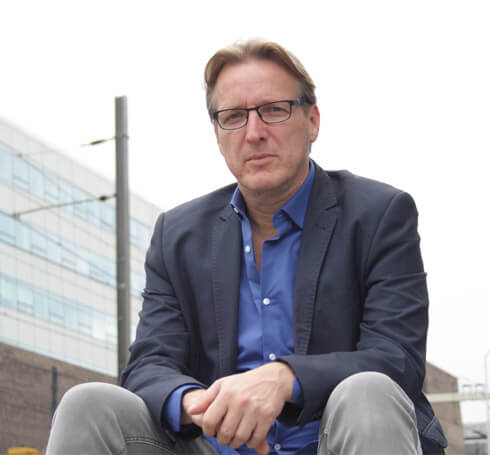 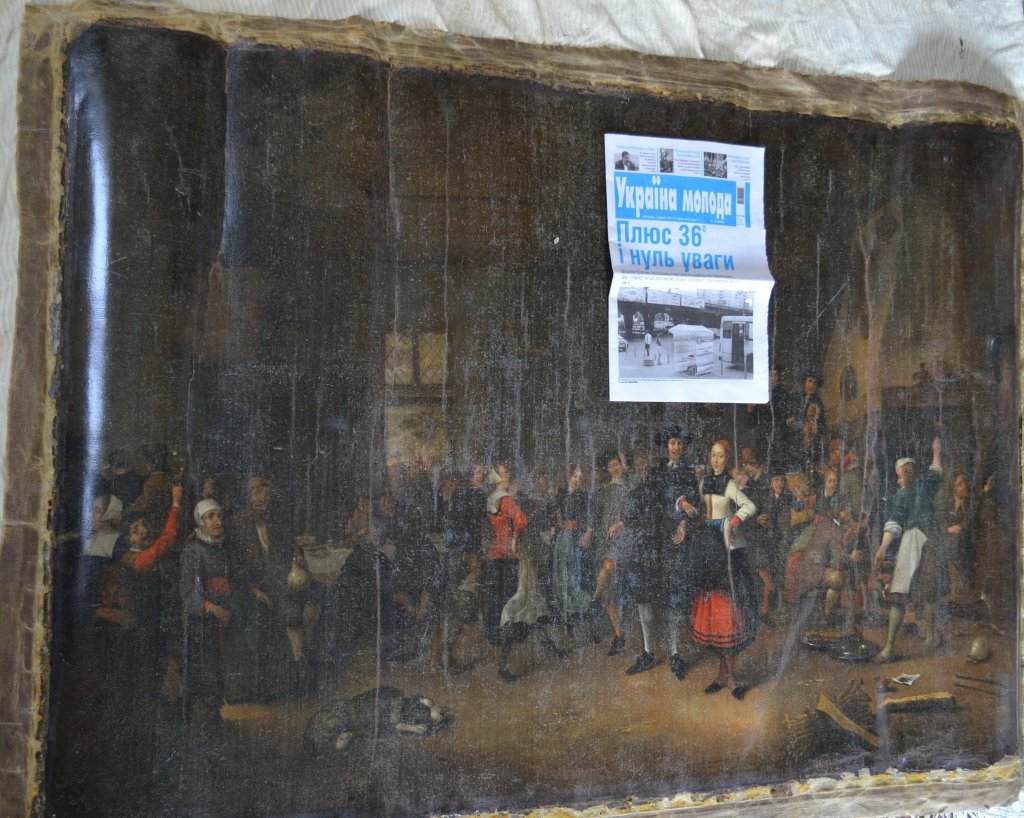 To make sure that the paintings were still in existence and in the custody of the OUN battalion a photograph was asked for, in reply to which a picture depicting A Peasant Wedding by Hendrick Bogaert with a recent newspaper on top of it was received.

With a translator being present Brand then met Humeniuk in Kiev and brought to his attention a number of comparable paintings, which recently had been sold for far lower amounts than Humeniuk thought the stolen ones to be worth.

Moreover, judging by the picture of The Peasant Wedding, Brand explained to Humeniuk that the current condition of the stolen works, which had been cut from their frames during the heist, would decrease their value even more.

It then turned out that Humeniuk had been sent by his superiors with the task of getting a 10% reward to the amount of 5 million Euros. That, Brand explained to him, would be impossible given his unrealistic estimation and the museum’s limited means.

Humeniuk wanted to consult his superiors and although he had been friendly, Brand and the Westfries Museum didn’t trust him nor the people he worked for, whoever they might be.

The Netherlands and Ukraine being befriended nations, the stolen paintings should be returned to the museum by the OUN battalion, even though it is no part of Ukraine’s regular army. Or so Brand and the museum thought.

Meanwhile an extensive network was consulted about who the superiors of Humeniuk could possibly be. Soon, a right wing politician whose party maintains close ties to the OUN battalion, came up with some interesting information.

He stated that the people holding the stolen paintings, who had sent Humeniuk to meet with Brand, did not regard the Westfries Museum as their rightful owner, but just as a another party to make money from.

It became clear that despite his good intentions and his friendly words, Humeniuk would offer the stolen paintings to whoever was interested, if the museum would not pay the full amount of 5 million Euros.

And then the politician added: “Humeniuk is only a middleman. This goes up to the highest echelons; one of the two men who sent him is Oleh Tyahnybok, leader of the far-right nationalist party Svoboda…”

Until the last elections Svoboda was part of Ukrainian parliament and it is hard to believe that a politician of a befriended nation would be involved in this art heist, but soon the information provided by the contact proved to be true.

In international media Svoboda has been characterized as being of a fascist and anti-Semitic nature. Ties that the United States government maintains with it have often been criticized, for instance by the Huffington Post in an article of March 7, 2013. 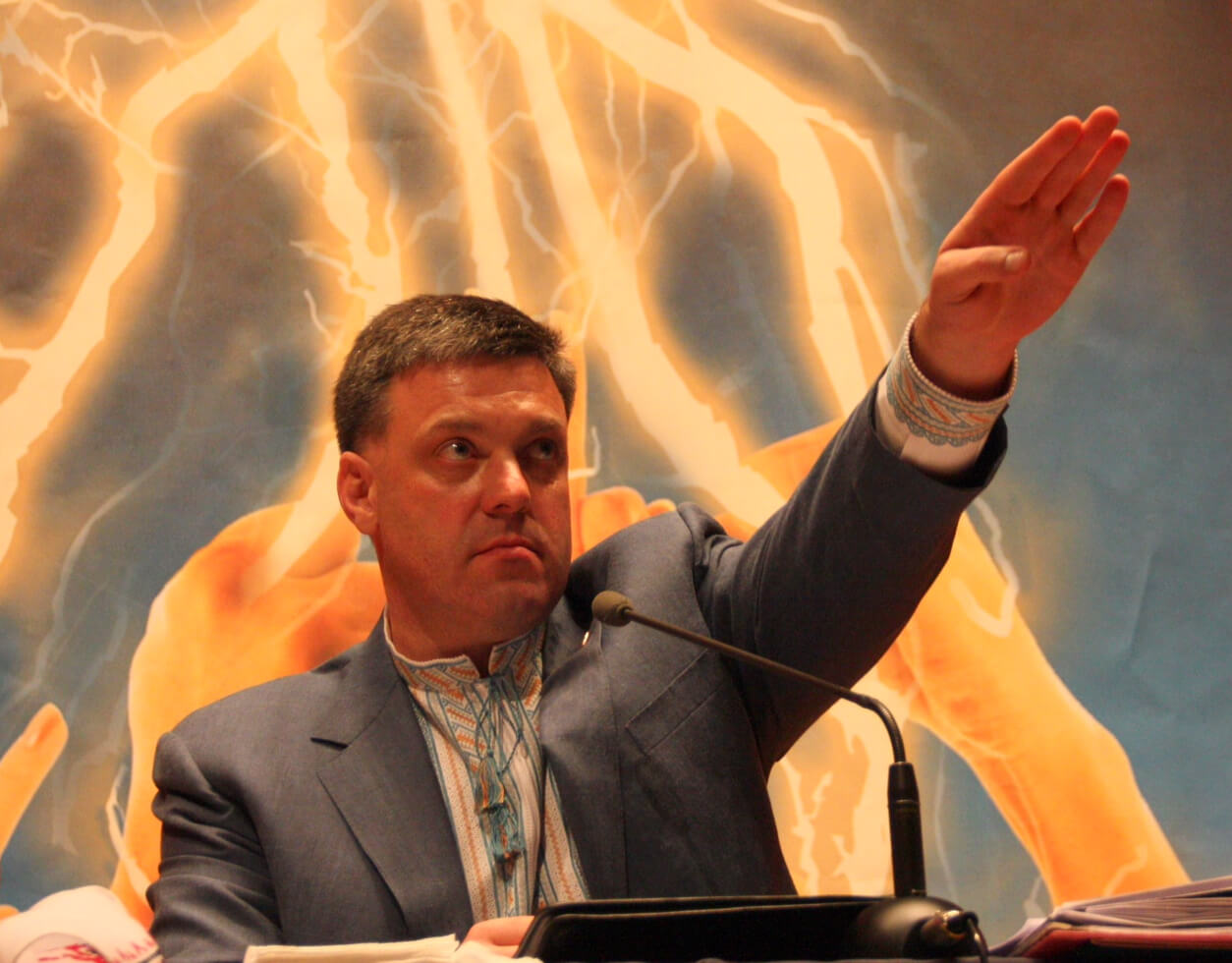 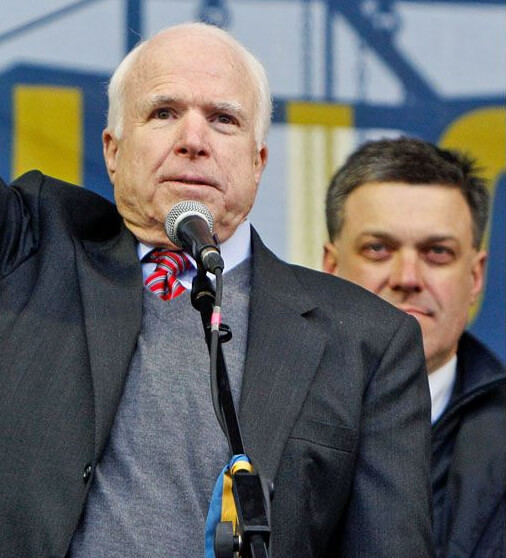 It was discovered that the stolen paintings indeed were being offered to other parties, amongst whom some private collectors. The talks clearly were not what would make them return to the Westfries Museum.

There remained nothing left to do than to get the Ukrainian authorities involved and through Interpol Brand and Omhoff passed on the names, addresses and phone-numbers of Humeniuk, Tyahnybok, private collectors and middlemen.

Exerting political pressure in Ukraine is easier said than done, though, since it is not always clear which parties, whether in secrecy or not, cooperate. Interpol and the other Ukrainian authorities involved offered their full support, nevertheless. 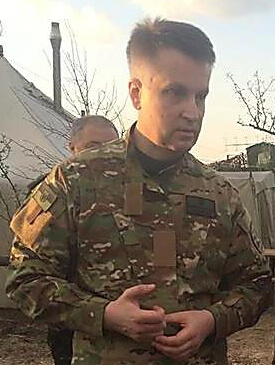 The authorities started their investigation while Brand and the Westfries Museum got in contact again with their informant, who told them that given the political sensitivity of the case the authorities would try to help, but that it would be a tough nut to crack.

Fact of the matter, according to the politician, was that the group holding the stolen paintings already for more than a year was headed, next to Tyahnybok, by Valentyn Nalyvaichenko, the second of the two men who had sent Humeniuk to meet Brand.

Nalyvaichenko, the informant added, had been head of the Ukrainian Security Service USB until two months earlier. It is hard to believe, but could it actually be true that the head of the secret service was trying to sell the stolen collection of the Dutch museum?

Research brought to light that Nalyvaichenko had headed the SBU in 2009 and again from February 24, 2014 until June 18, 2015. Only two weeks later, early July 2015, he and Tyahnybok had Humeniuk contact the Dutch Embassy about the stolen paintings.

Last month, Nalyvaichenko delivered a speech about Ukrainian law enforcement to the U.S. Congress in Washington D.C., probably to search American backing for when he is going to challenge President Petro Poroschenko at the next elections in Ukraine.

Brand passed this information on to the Ukrainian authorities, the investigations of which meanwhile had confirmed the involvement of Tyahnybok with the case. More evidence of other members of the Security Service having played a role soon followed.

An informant from Germany called with the information that a collection of paintings by Dutch masters was being offered to a gang of German criminals. The offering party was from Ukraine and acted rather mysteriously.

Assuming that this was about the paintings from Hoorn, Brand and Omhoff asked the German for pictures. When these were received shortly afterwards, Brand’s assumption was confirmed and he asked the informant to find out who the offering party was.

A few days later the German called back saying that it was a corrupt bunch of members of the Ukrainian Security Service. Being asked whether a certain Nalyvaichenko was involved he replied: “How do you know that name?”

That members of the Ukrainian Security Service have connections with criminals abroad became clear when a mole operating within the Dutch police force recently was arrested; he apparently had introduced both parties to each other.

Meanwhile, Tyahnybok’s involvement in the art heist has been confirmed. Even though two independent witnesses have named Nalyvaichenko in relation with the case, the latter for the time being remains innocent until proven guilty. 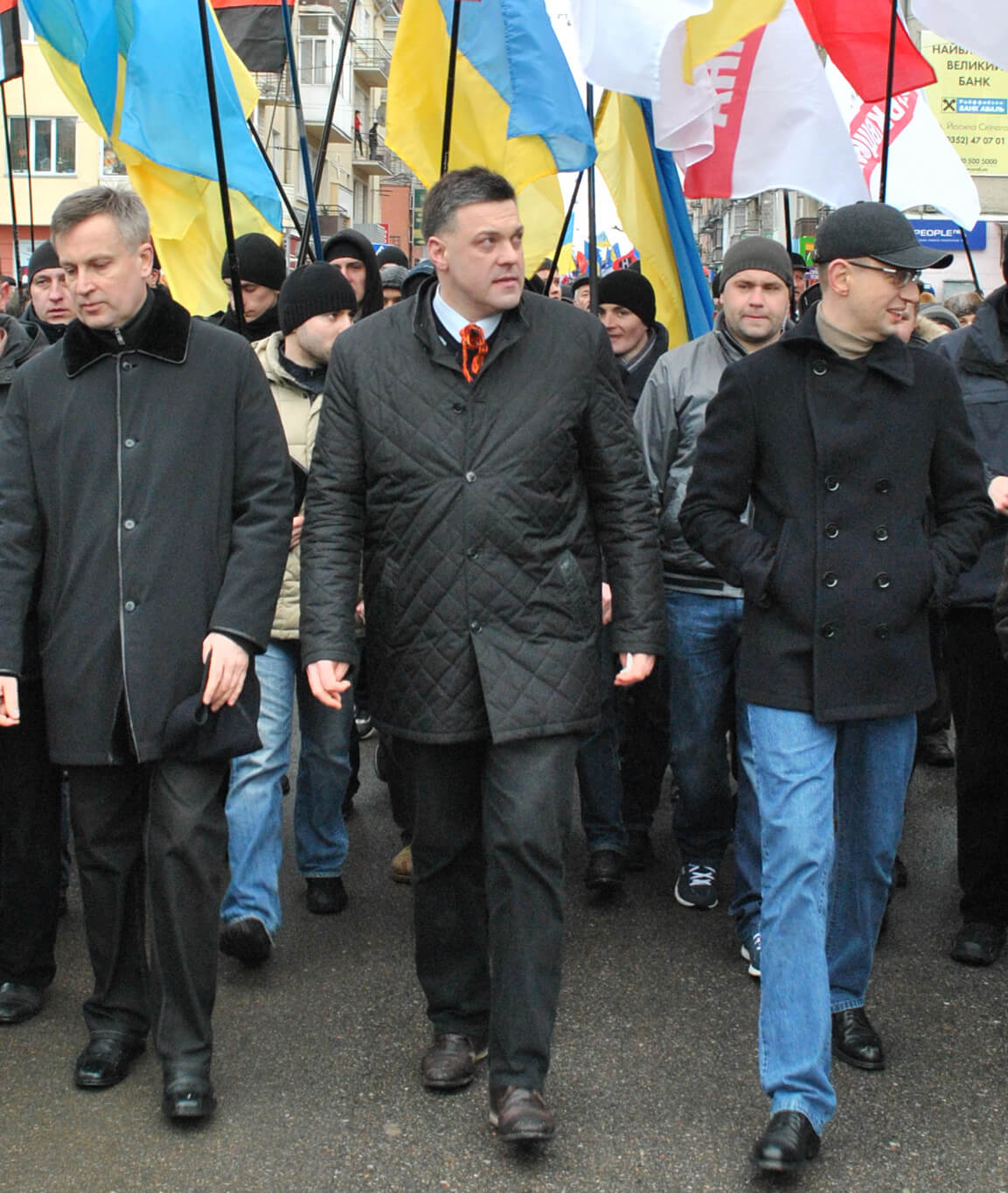 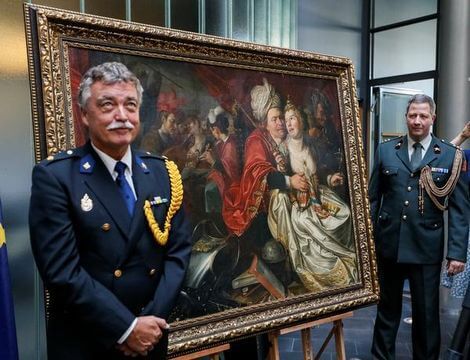 The situation then was as follows: Ukrainian authorities were investigating the case with Dutch ones meanwhile increasing pressure, while the perpetrators through their ties with Svoboda, SBU, and the OUN battalion presumably knew their every move.

But there was an even bigger problem: of stolen art only 5% to 10% is ever retrieved. In this case the paintings were known to be in the hands of one party in Ukraine. It was also clear that 10 years after having been stolen they were in a deplorable state.

In her ongoing quest for arms the OUN battalion deals with people in Kazakhstan, Tajikistan and Afghanistan. If the paintings in their current condition are sent to one of these countries, possibly in exchange for arms, they will be lost for ever.

It had become clear that attempts were made by the Ukrainian nationalists to sell the stolen paintings and judging by the numbers that informants subsequently reported to have been offered – 24, 20, 16 and finally 15 – they seemed to be succeeding in doing so.

After long and intensive investigations an overview was made of all involved, their ties, the middlemen acting as sellers and their potential clients. All of their names, addresses, phone numbers and sometimes even photographs were passed on to the authorities.

Nothing remained to be done but to finally seek publicity in order to increase pressure. Doing nothing with the risk of the paintings to disappear into the heart of Asia simply was not an option…