The book of Hafez

The search for the book of Hafez; the Persian Shakespeare

Previous case
Back to track record
Next case 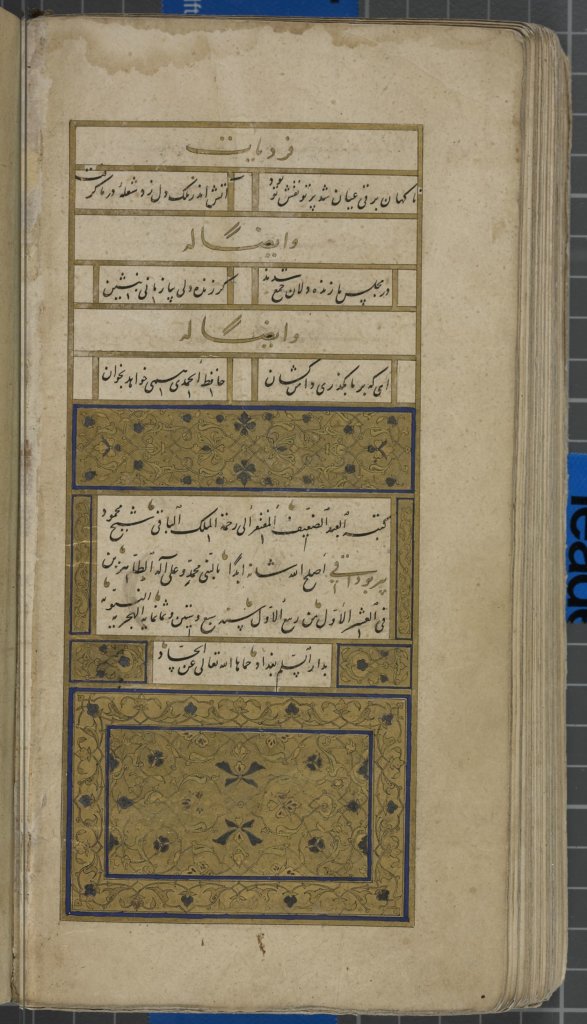 The theft of the book of Hafez

In 2007 a lonesome 86 year old man dies in a clinic in Munich, Germany. Originally the man, Djafar Ghazy, is from Iran.

People in the town of Neuhausen remember him as lonesome and withdrawn. He sometimes went to a coffeehouse to see other people originating from Iran, but most of the time he stayed on his own. When people saw him, they noticed that he always carried a little book with him.

When the man dies in 2007, his distant relatives clean up the house. On his computer they make a big discovery. Their lonesome and seemingly not wealthy relative has spent decades in collecting hundreds of ancient and valuable Islamic and Persian manuscripts, with a total value of many millions. One of the most exciting and precious collections of his kind.

They search the house but there is no trace of this collection. They suspect foul play and they hire an ex police detective, named Erhard Reuther. He finds out that the deceased man had made some contacts in the coffeehouse. He often drank tea with a 70 year old Iranian who sometimes visited him during his last days. Reuther visits the man who tells him that he has never heard of any collection. Reuther then advises the relatives to contact the police.

The suspect is caught

The police starts an investigation and finally, in 2011, they get permission to search the house of the suspect in Zamdorf. In the basement they indeed find 174 manuscripts and books, with a total value of over 3 million Euros. They also discover that one book has already been sold through a London auction house for over 1 million Euros.

Unfortunately the most important piece is missing but the suspect denies knowing anything about it. It was the book the deceased collector always took with him, wherever he went. A book of only 21 x 13 cm with 159 handwritten pages. It is the world famous so-called Diwan of Hafez.

The suspect says that the deceased man called him his son and gave him the books. But the police do not believe him. Later he is found guilty and sent to prison. The 174 books are returned to the relatives.

Iran claims all the 174 objects

In one of the books a small note is found, written by the deceased collector. He wrote that after his dead two books should go to the State Library and two precious Qurans to the National Museum of Iran. When the Iranian consul-general comes to collect them, he declares – to the disappointment of the relatives – that the State of Iran also want more of the 174 objects as they are Iranian heritage. But the German judge refuses. They pieces were legally bought at the time…

As said, the Diwan of Hafez, worth, many millions, is still missing. The relatives, the ex-police detective Reuther, the German police but also the Iranian state are still searching for it. The relatives have offered a reward of 50.000 Euros. 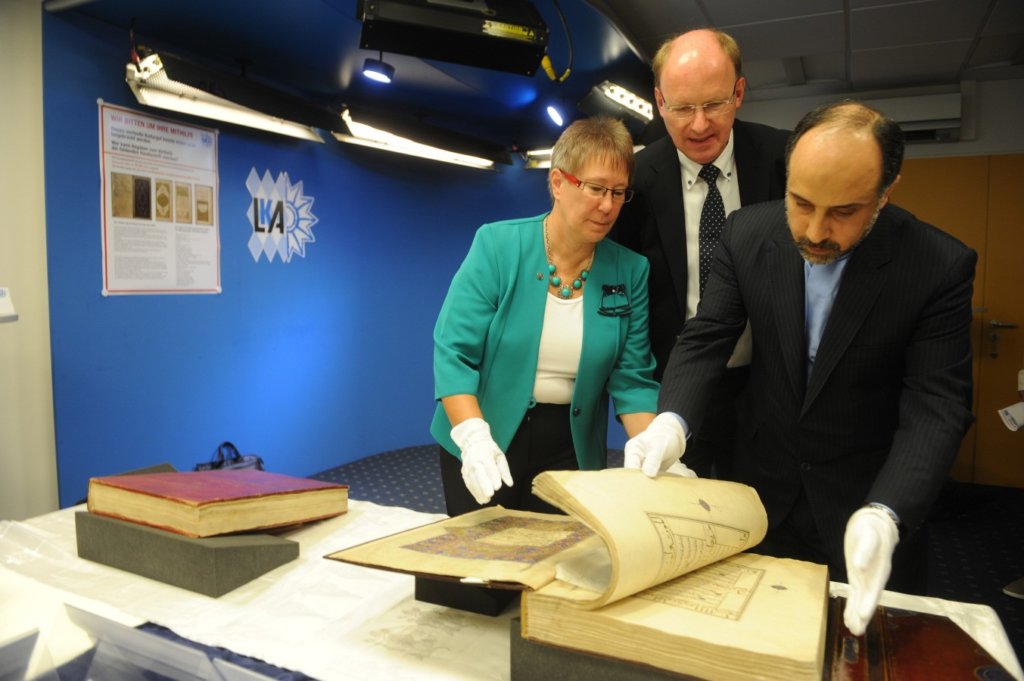 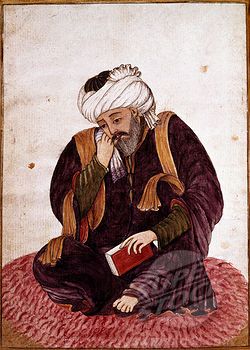 The Diwan of Hafez

A Diwan (Persian: دیوان, divân, Arabic: ديوان, dīwān) is a collection of poems by one author. Hafez (c. 1321-1389) is regarded as the greatest Persian lyrical poet. He is often called the Shakespeare of Persian literature. No other author has had such an influence on post 14 century Persian writing and his works as still found in many Iranian homes, Afghan, Turkish, Iraqi and other Arabic/Islamic countries. October 12 is celebrated as Hafez Day in Iran. Many Iranians use the Diwan of Hafez for fortune telling.

There is no definitive version of his collected works (or Dīwān); editions vary from 573 to 994 poems. Only since the 1940s has a sustained scholarly attempt been made to authenticate his work and to remove errors introduced by later copyists and censors.

As the stolen Diwan is from the year 1462/3, not long after the death of Hafez, it is considered to be one of the most accurate ones and therefore of the utmost importance. The beautiful handwriting (calligraphy) is of the hand of Sheik Mahmûd Pîr Bûdâqî.

Iranian Embassy on the hunt

At the end of 2018 I was called by one of my informants in Germany. He, of Iranian origin, was a dealer in ancient manuscripts and asked me if I could come and visit him. ‘It’s very urgent,’ he said. ’I am scared.’

I went over to Germany to meet the guy. He seemed paranoid. He told me that he was approached by some Iranians who only spoke Iranian and who told him they were linked to the Iranian Embassy. The way they were dressed he was sure that they were send over straight from Iran. And the way they were asking questions, like an interrogation, he knew they were secret service, as he had had his problems with the secret service before leaving Iran ten years ago.

They showed him a picture with on it Der Spiegel from 2010 and next to it a book. The three man explained to him that this Diwan of Hafez was stolen in 2007 in Munich and they wanted to know whether he had seen it before, which he had not. They gave him a telephone number and told him to call that number as soon as he heard anything. They also told him that there was a big reward and that it was in Iran’s interest to help them.

After the three men had left, he had read everything about the theft in 2007. He also read that the Iranian Consul General had more or less demanded that Germany would give all the 174 manuscripts to Iran, which was denied. But, as the most important work was still missing, he figured that Iran was searching for it, and if located, to bring it to Iran. What could the Germans do against that? 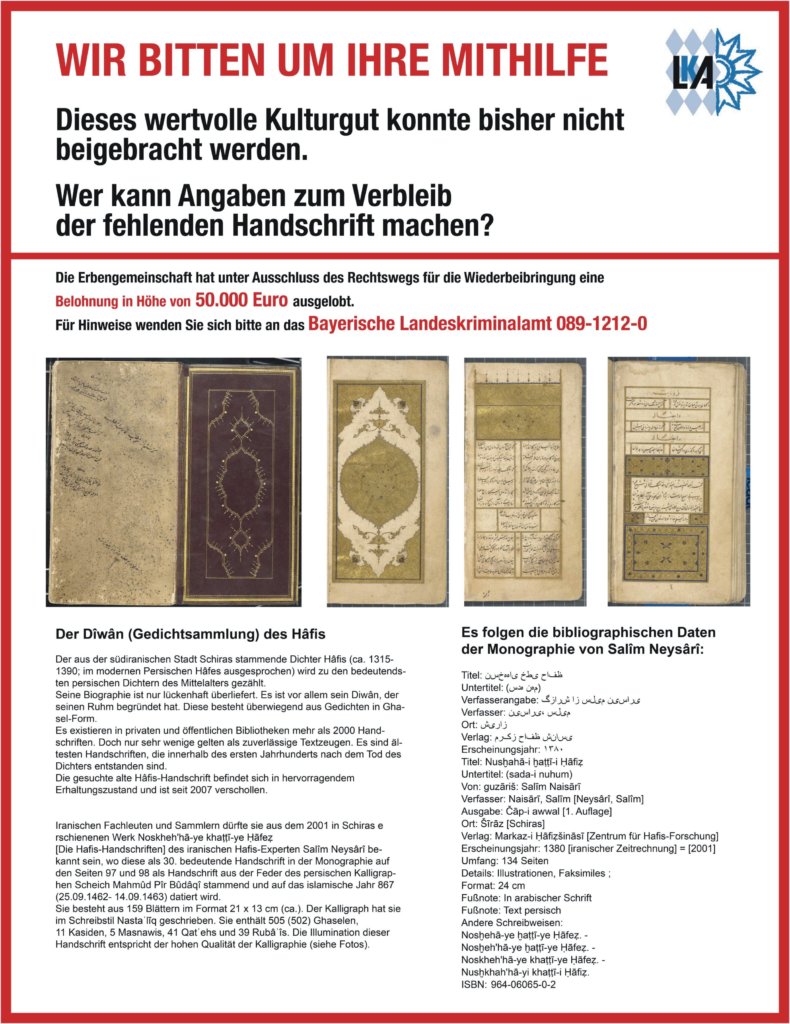 Search for the book of Hafez

My informant asked for my help. He was afraid that they saw him as a suspect. 'Why else would they come to me? Someone mistakenly must have mentioned my name…'

I promised to help him. The only way that came across my mind was to try to find the book myself. In that case the search would end and the book would not be smuggled to Iran. But it was tricky, I had to get my hands on that book before the Iranians did. And where to start?

In the articles about the theft it was mentioned that the thief had sold one other book through an important auction house in England. So I first checked the internet to see if the Diwan was sold somewhere around the world, but in vain.

England is thé market for ancient Islamic and Persian books. So I asked people I work with in London if they could ask around. When I was in London I spread the word too. But nothing came out of that. Or the book was not in England or people were afraid to talk. But then finally I got a call from one of my informants. He had asked one dealer in Islamic manuscripts, whether he had heard anything. When this dealer asked my informant why he wanted to know, my informant told him that the piece had been stolen and some Iranians came over from Iran, looking for it. The man said he never saw the book but he became nervous…

Race against the clock

A week later the man called my informant. He said that he wanted to see him again. My informant took me along. When sitting there he wanted to have proof that the piece was stolen, so I showed him the wanted poster (in German) and the only article (in German) that was on the internet. He still denied having seen the book but now I saw it too: he was quite nervous. We left but the next day we were asked to come again.

He then confessed that he had seen the book. As the book was not in any stolen art database and nowhere to be found on the internet (apart from the two German articles) he swore that neither he or anybody else knew that it had been stolen. He then told that a friend of him had bought the book from a German dealer around 2011 and had sold it to one of the most important collectors of Persian ancient manuscripts, an Iranian living in England. The friend had passed away but the buyer was also one of his clients and a very powerful man. That Iranians supposedly were searching for it made all nervous.

Finding the Diwan of Hafez

He then said: ‘I go talk with the guy and explain him the situation. If you promise to keep our names out…' I gave him my word and we were asked to come back in a week.

After a week we met him again. He was even more nervous, saying that Iranians had turned up in London, asking around. Apparently the secret service was getting closer too. He told us that he had spoken to the buyer. The buyer was shocked and furious. After all he was sold a stolen book and now everyone was searching for it.

Then he started to sweat again… ‘No he took the plane to Paris with the book because he wants his money back… He made an appointment with the seller. He is afraid for the Iranian secret service.’

I could not believe it. If he succeeded, the Diwan would disappear again and probably forever. He had bought a book without knowing that it was stolen but by trying to hand it back to the fence, he would incriminate himself.

So I said: ‘You gonna call this idiot right now.’

He said: ‘I don’t have his number’

I: ‘Oh yes you have. Either you call him right now or I call the Iranians…’

He jumped up, went downstairs and stayed away for 45 minutes. When he came back he said: ‘He is booking a return flight right now. You have the book by tomorrow.’

The next day we went again and there it was: the Diwan of Hafez…

I immediately called the Dutch police who informed the German police.

As the thief at the time got caught and sentenced and the theft has reached the statute of limitations, no further investigation will be initiated. 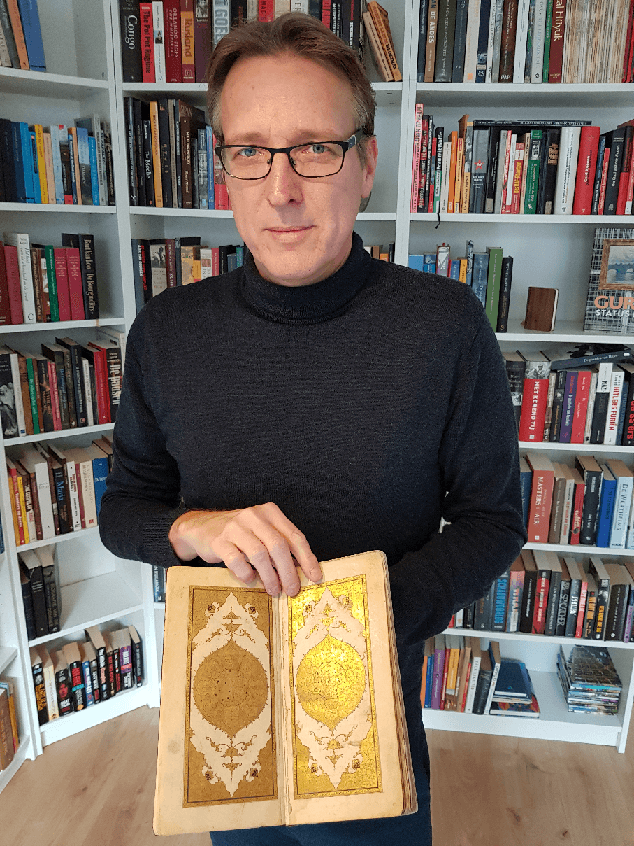 "Goethe was the biggest fan of Hafez."

The media about the book of Hafez

Previous case
Back to track record
Next case